“Indulge yourself in new things, take new risks and meet new people to keep yourself rejuvenated and alive” 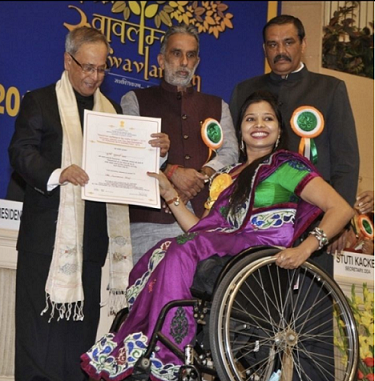 Womenovator Suvarna Raj has an explicit amount of courage to follow what her heart says, despite the ups & downs of life. Polio struck her at the age of two, even though she had a paramount interest in playing sports. After school, her life changed for good as she decided to be confident no matter what life throws at her. Thus, she has an unaccountable variety of activities and awards to her credit. To name a few, she is an International para-athlete, a social worker, an activist for the specially-abled people and an accessibility counsellor. She is a mother of a six-year-old son, whom she keeps inspiring with her ideologies and ideas. She is a vivacious woman, with an integrity of a politician, mind of an artist and willpower of an athlete. In 2013 and 2014, she was awarded various prestigious awards for being a tennis player and social worker. She was honored with National Woman Excellence Award 2013, National Role Model award by President of India, National Youth Award in 2014 and the Karamveer Puraskar by ICONGO in the year 2015. She wanted to bring a radical change in the people’s perceptions about the specially abled people and also wants to spread informative awareness. She joined politics as well at a later age, in order to represent her ideologies in a better manner to the world. She also wants to bring changes in a differently abled bill passed by Indian Govt. in which the government has increased the types of disabilities from 7 to 21 but employment percentage has been increased from 3 percent to 4 percent only. She wants to raise her voice from the local level panchayats to municipalities, state assemblies to Parliament to ensure that the rights of differently-abled people are restored.